A skilled artist with wide-ranging interests and accomplishments, Anne Rogers Minor was a “New Woman,” one of a wave of educated, independent, and active women who emerged at the turn of the 20th century. She was born in East Lyme and later moved to Waterford, Connecticut, studying painting under her cousin, Henry Pember Smith, her noteworthy father-in-law, Robert C. Minor, and also with turn-of-the century luminary, Henry Ward Ranger, the founder of the Lyme Art Colony.

A savvy businesswomen, Minor bought and sold real estate and ran a summer hotel in Waterford in the 1880s and 90s. After she married, she continued her work as an artist, exhibiting with the Connecticut Academy of Fine Arts in 1917 and the New Haven Paint and Clay Club in 1920.

Anne Rogers Minor s civic work increased as she became more involved with the DAR (Daughters of the American Revolution), which was then the largest women s membership organization in the country. She co-produced an important book on citizenship for immigrants, and rose through the DAR s ranks to became the organization s national president from 1920-23.
Source: Lyman Allyn Museum 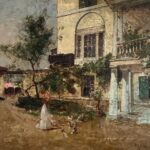