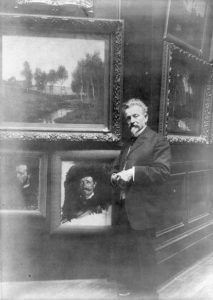 Largely self-taught, Max Weyl painted much in the manner of the Hudson River School in his early years. After a trip to Europe in middle age, his work turned toward the direction of the Barbizon mode; for years, in fact, his admirers called him the “American Daubigny.”  From the 1890s on, however, it was George Inness, the master landscapist, who had the most profound influence on Weyl’s work.

Weyl was born in Muhlen-am-Neckar, near Wurttemberg, Germany in 1837.  As a boy, he was apprenticed to a watchmaker and, after emigrating to America, he made his living as an itinerant watch repairman.  In 1861, however, he settled permanently in Washington, DC and opened a small jewelry store.  Through the 1860s, he experimented with painting as a hobby, trying still lifes of fruit and flowers at first.

In 1870, he finally worked up enough courage to hang several of his small paintings in the window of his shop.  A great boost to his career came when Samuel Kauffmann, publisher of the Washington Evening Star and president of the board of trustees of the Corcoran Gallery of Art, stopped in to have his watch repaired, admired a small landscape and bought it. Over the years, Kauffmann became a regular patron.

It was not until 1878, however, that Weyl listed himself in the city directory simply as an artist. His first exhibition of landscapes in 1879 sold well enough to pay for a trip to Europe to visit museums and studios.  It was after this trip that the Barbizon influence became so apparent in his work.

Weyl’s work quickly won him renown. In the 1880s and 1890s, the Brazilian ambassador, a noted collector, bought 14 of his paintings, as did other wealthy collectors.  Later, both Mrs. Grover Cleveland and the first Mrs. Woodrow Wilson bought his landscapes for the White House.  On his seventieth birthday in 1907, the Corcoran Gallery held a retrospective exhibit in honor of Weyl. They praised him with these words: “From the standpoint of art you have contributed works of genius that will stand for all time: while your bearing as a man, citizen and friend has been of that modest and yet far-reaching character that wins the love and retains the esteem of those with whom you have come in contact.”

In the 20 years before his death in 1914, Weyl was known particularly for his poetic paintings of the scenic Rock Creek valley at the edge of Washington and of the wide tidal marshes of the Potomac river.