A child of the Great Depression, Corey was a self-taught painter dedicated to plein-air painting, capturing the majestic and the mundane in his native New England. He loved nature and considered painting out of doors to be the purest of all artistic endeavors. According to the artist, one must brave the elements to capture the mood and lighting effects in order to convey an emotional connection to the scene at hand. His style is recognized for its subtlety and loose brush strokes, yet with keen attention to detail.

Bernard Corey was born in Grafton, Massachusetts and spent the first part of his life working for his father, wallpaper hanging and house painting. This afforded him the flexibility to paint on the side, nearly daily. Starting in 1960, he left the family business and committed himself to his art. Corey was an active member of such prestigious associations as Allied Artists of America, The Salmagundi Club, Guild of Boston Artists, and others. He received national and regional awards too numerous to list.

Painting alongside such luminaries as Aldro Hibbard, Emile Gruppe, William Lester Stevens, and Michael Graves, Corey was known to be a passionate seeker of subjects and a generous teacher. 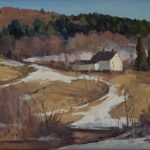 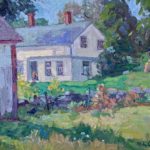 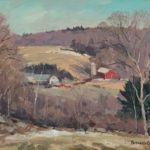