“Carrie” Smith, born in southern California in 1938 graduated from Smith College and has lived and worked in Washington, DC most of her life. She began taking courses at the Corcoran School of Art in 1973 where, for three years, she studied painting, drawing and design. She then earned an MFA from American University in 1979. The following two decades were her most active. Smith was represented by galleries in Washington, DC, Virginia, Florida and Texas and exhibited her work in France, Switzerland, Holland, and throughout the United States. She received many awards and commissions from juried local and national shows. Her art is held in numerous corporate and private collections including CSX Corporation and the Marriott Corporation.

Anne Behrens of the Washington Post wrote in 1983 that Smith’s paintings demand a lot of space to fully appreciate the brilliant placement of dabs of color, deeming the watercolors and oils, “bright, colorful and innovative.” The smattering of color and form embody the natural shapes of plants seemingly in a random placement, she described, but when the viewer moves a few steps back, the “surprising symmetrical balance” is revealed. Smith says of her work, “I see landscapes as abstract patterns. As part of my work, I feel it is up to me to find them.”

Considering her body of work, mostly landscapes, one recalls artists such as Seurat and his stippled application of paint, Monet with his evocative sense of place and certainly the American Impressionists with their adherence to vivid colors, impasto and tranquil scenes. Carrie Smith evokes these past masters and then, turns and makes these joyful works all her own. 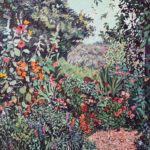