Pen, ink, and gouache on paper 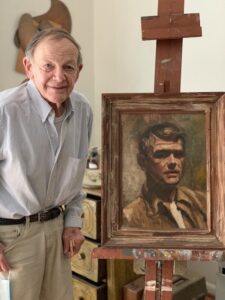 Guy Fairlamb was a realist painter and teacher based in Washington, DC who was known for his adept skill across a variety of subjects, mediums, and applications.  Fairlamb drew on the methods and materials employed by the Old Masters as well as a keen sense of observation and strong desire to capture the essence of his subject, all of which he learned from his time studying under Jacques Maroger (1884-1962) a French émigré living in Baltimore. Steeped in the Old Master’s techniques, Fairlamb carried these teachings along with him as he produced realist works that seem to transcend time.

From this point forward, Fairlamb followed his military family’s ethos: one must not fail, one must have drive and determination and success will come. This took some doing. Fairlamb credited his artistic drive with tackling his crippling dyslexia. He developed artistic strengths instead of pursuing elusive academic prowess and overcame the challenges of dyslexia. His strength at drawing stemmed from this need to channel his considerable energy.

Fairlamb’s body of work ranges from large-scale public mural commissions to seascapes, landscapes, and most successfully, portraiture, still life, and tromp l’oeil. Fairlamb also studied under Ann Schuler (1917-2010), a faithful member of the “Baltimore Realists”, and began exhibiting in his 20s and has continued painting and teaching art throughout his career. He always remained true to his realist roots and stood firm against his more fashionable avant-garde peers, the Abstract Expressionists in the 1960s, followed by the Pop Artists, Minimalists, and other movements and temptations du jour. Instead, he continued employing Maroger’s teachings of Old Master techniques and formulas largely lost to modern painters. Fairlamb’s teacher passed on the specific ratio of “ingredients” used by the Old Masters to blend paint with white lead, linseed oil, and other elements to maintain color quality in oils and quick drying time without sacrificing fluidity. Following the lessons from the Old Masters that Maroger preached, Fairlamb made his own inks out of walnut shells and drew with pens fashioned from turkey quills. Fidelity to the old ways was a hallmark of Fairlamb’s methods and is recognizable on the canvas, panel, or page.

Whether working on monumental murals, oil paintings, watercolor, pen and ink studies — Fairlamb was infinitely curious about the subject and media he pursued. The artist wrote, “Everything is worth painting. I respond to what I see in nature, the human form, objects, and what is happening in life. These subjects inspire me and arouse the artist in me. They become my focus. When touched emotionally and intellectually the pathways to my creativity are opened and my artistic journey begins.”  Right up until his recent death, you could still find Fairlamb teaching art, grinding his own pigments, and painting and drawing in his light-filled studio. 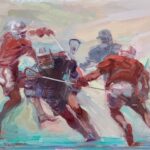 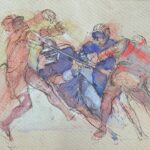 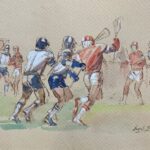