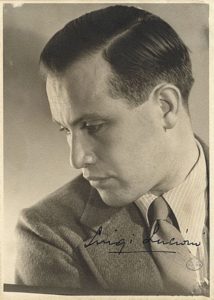 Luigi Lucioni was born in the small Northern Italian town of Malnate in 1900. By the age of six, he was keenly interested in drawing and was enrolled in an art school. By the time his family left Italy for America in 1911, Lucioni was already an excellent draftsman. In 1915 he won a competition that allowed him to attend Cooper Union and later enrolled at the National Academy of Design. While there, he won a Tiffany Foundation scholarship that sent him back to Italy to study.

Seeing the Early Renaissance painters, in particular Masaccio and Piero della Francesca, for the first time cemented Lucioni’s love for realism and clean clear lines. This trip, his first since his family left, would have a profound effect on Lucioni’s style for the rest of his life. Despite the rise of European Modernism that swept across America in the 1930s, Lucioni remained committed to realism. Precisely drawn forms and smooth paint surfaces were hallmarks of Lucioni’s defining and enduring style.

Lucioni is well known as an extremely accomplished Regionalist painter of landscapes, still lifes and portraits. His contemporaries include Thomas Hart Benton, Grant Wood and others. Lucioni was fiercely dedicated to his craft. He worked every day of the week on a schedule either in his New York studio in Washington Square or in Vermont. He painted landscapes outdoors in Vermont in the summer and when the weather turned colder and the days shorter he focused on still lifes and portraits in his New York studio. He won many honors including first prize at the Carnegie International Exhibition (1939) and the Corcoran Biennial. He was a member of the Society of American Etchers and the Allied Art Association.

“… Luigi Lucioni can be appreciated today as one of the finest painters of still life this country has produced in the twentieth century. With their pristine surfaces, unusual arrangements, and vivid color combinations, his canvases stand out as the creations of an artist deeply aware of tradition yet beholden to no one.” (Mark Richard Reinfurt, Equinox Antiques)