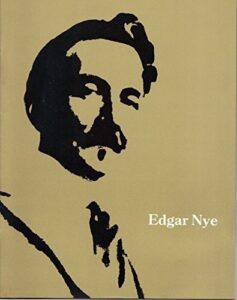 Edgar Hewitt Nye was an important painter in the emerging Washington, DC art scene in the early-20th century. Nye was born in 1879 in Richmond, Virginia, and died in 1943 in Washington, DC, where he lived most of his life, except for the years he spent in France and England between 1901 and 1914. He taught privately at his studio.

He studied at the Corcoran School and with J.N. Barlow of England. He was a member of the Society of Washington Artists; Washington Watercolor Club; and the Washington Landscape Club.