Born in Brooklyn, NY in October 25, 1876, F. Edwin Church attended Columbia School of Architecture. He later studied under John Twachtman, Frank Dumond, and at the Académie Julian in Paris with J.P. Laurens (1905).

Church traveled through Europe studying the Masters and making art. He returned to New York and continued to paint throughout his life.

Throughout his long life, Church remained an enthusiastic sportsman playing tennis until age 95. Although he shares a name with a noted nineteenth-century Hudson River School artist, there is no relationship. 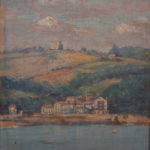