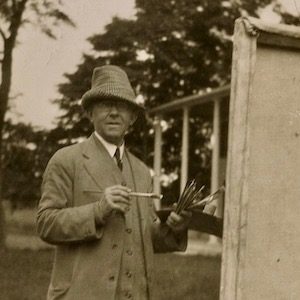 One of the early Chicago artists to adopt Impressionism, Karl Buehr became a prominent landscape and figure painter. In a December 1896 student exhibition at the Art Institute of Chicago, a reviewer for the Chicago Times Herald described Buehr’s landscapes as “blithe and joyous” with “country roads brilliant in sunlight . . . fields rich in summer verdure, under soft skies painted in a high, musical key.”

Buehr was born as one of seven sons to a prosperous German family who emigrated to America and settled in Chicago in 1869. He was first exposed to his signature style of Impressionism in 1888 when he enrolled in night classes at the Art Institute while working in the shipping department of a lithographic firm near the Institute. He remained a student there until 1897 and was recognized in a Chicago Times Herald editorial of June 13, 1897 as one of the Institute’s most outstanding pupils.

The next year, his art career was temporarily put on hold when he briefly enlisted with the U.S. Army in the Spanish American War. In 1899, he resumed his art studies, this time with Frank Duveneck. He exhibited a painting at the Paris Salon of 1900 and studied at the Academy Julian with Raphael Collin for two years. Then he went to England, enrolling in the London Art School, but had returned to Paris by 1908. During this time, he began painting at Giverny, the home of Impressionist leader Claude Monet, and by 1912, Buehr was listing that village as his home address. One of his good friends and associates at Giverny was Frederick Frieseke. He remained for some time in Giverny, and here he became well-acquainted with other well-known expatriate American Impressionists such as Richard Miller, Theodore Earl Butler, Frederick Frieseke, and Lawton Parker. It seems likely that Buehr met Monet, since his own daughter Kathleen and Monet’s granddaughter, Lili Butler, were playmates, according to George Buehr, the painter’s son.

In 1914, Buehr returned to the United States and took a teaching position at the Art Institute of Chicago, which he held for the remainder of his life. Buehr became an Associate National Academician in 1922 — membership in this elite group was and is to this day one of the highest honors an American artist can attain.