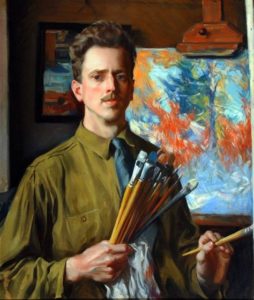 Aiden Lassell Ripley, painter, watercolor specialist, printmaker, and teacher, was born in Boston on December 31, 1896, and grew up in Wakefield, Massachusetts where his father was a member of the Boston Symphony Orchestra. Aiden Ripley, like his father, was also an accomplished musician, and although he chose art as his career he always kept his appreciation for music for the remainder of his life, most of which was spent in the Boston area. He began his studies with Philip Leslie Hale at the Fenway School of Illustration and later at the Boston Museum of Fine Arts School under Tarbell and Benson. After serving in World War I, Ripley returned to the Museum School where, in 1917, he won the Paige Traveling Fellowship that enabled him to study abroad for nearly two years in Africa, France and Holland, from December of 1923 until 1925. His newlywed wife Doris accompanied him on his trip to Europe. The two traveled through Europe, and Ripley produced a large number of watercolors on that trip as well as a smaller number of oil paintings.

Upon his return to Boston, he received his first one-man show at the Guild of Boston Artists in 1926 where he exhibited paintings that depicted the landscapes done in Europe and Spain and of his native New England. Much to his delight the show was a huge success and one critic, A. J. Philpot of the Boston Globe stated: “The flash from obscurity to fame has come the past week to Aiden L. Ripley, a young Boston painter, has given an unusual thrill to the artists and connoisseurs of this city. In a week he was transformed from an art student to a painter of rank with the foremost of the day in watercolors and his works were being purchased not only by connoisseurs but by some of the foremost artists in Boston–the people who know.” That exhibition revealed Ripley’s strength as a draftsman. He remained closely associated with the Guild for the rest of his career.

Inspired by another successful showing of works held later that year Ripley decided to embark on a summer trip to Scandinavia in 1927. Because of the rave reviews from his exhibitions held the previous year, Ripley continued to find an eager audience for his work. A reviewer for the Boston Post in the St. Botolph exhibition of February 1927 stated: “Several canvases by Aiden L. Ripley are especially notable. Notre Dame is extremely effective. The beautiful cathedral is viewed from the distance, across a bridge. In the foreground, the river is crowded with boats and the walks along the bank with strolling people. Brilliant sunlight and cool shadows are beautifully painted in the canvas called Cataracts–Toledo, the churning water, blue and green and again white, swirls about the reservoir, while in the foreground are ruins of ancient buildings.”

For a time during the Great Depression, Ripley, (like many of his contemporaries) experienced difficulty in selling his landscape paintings depicting the New England countryside. It was during this time that Ripley, (an avid sporting enthusiast) at the behest of his hunting companion incorporated sporting scenes in his work. For Ripley there was no turning back, this formula brought him unparalleled success as an artist in this genre and today he is known as one of the preeminent sportsman and wildlife artists in the country. He was also known for genre, landscapes, portraits, gardens, farms, hunting, fishermen, birds, boats, and a series of Revolutionary War pictures based on the life of Paul Revere.

Ripley was known as a perfectionist when it came to perspective and draftsmanship. His paintings depict a very accurate portrayal of the life of a sportsman during the early to mid part of the twentieth century. Although he worked in oils as well as other materials his mastery over the watercolor medium was especially noteworthy. Many of his paintings reveal a relaxed atmosphere that reminds one of a time when life was less complicated so to speak. This was a carryover from his real-life as Ripley believed in simple living and took enjoyment in outdoor recreation and relaxation of all sorts. He was described as a “tall man, with large hands, yet he had a delicate touch.”

He won recognition and prizes for his work including: Logan Purchase prize and medal, Art Institute of Chicago, IL., 1928; co-winner, first Dacre Bush prize, Boston Watercolor Society, 1929 and others. Ripley was represented by many important galleries including, Kennedy Galleries in New York and others. He taught at the Harvard School of Architecture in 1929.